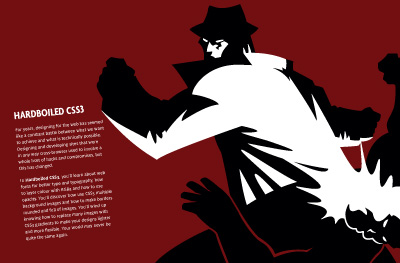 It’s April 2007 and just I’ve launched the fourth version of my website. To all intents and purposes it’s the first version anyone in the public has seen, and the web knows little of my curly antics. I’m living in London, working full-time at Sanctuary Records, and have recently given Flash the boot. The Web Standards movement is in full swing and I’m soaking it up. There is one book in particular, published the year before, that has massively influenced the way I approach web design, both in terms of visuals and code, and that book is directly linked to the success of my recent redesign. That book is Transcending CSS by Andy Clarke.

Fast forward to the present, October 2010, and Andy has released his follow-up book just seconds ago. The landscape of web design has changed drastically in the time since Transcending, and we’re in need of a guide to steer a course through the stormy seas of CSS3 and wild woods of HTML5. That book is Hardboiled Web Design.

This time around, I’m honoured to say that I’ve been involved in its creation, having provided interior illustrations for the double-page spreads that start each of the book’s four parts. Andy and the vast majority of the Hardboiled team are now people I can call good friends, but they also remain my personal heroes; people like Kevin Cornell (the cover artist), Tim Van Damme and Chris Mills (the technical editors), Jeffrey Zeldman (the foreword writer), Geri Coady (the illustrator for the example website), and Mark Boulton (the publisher). I really am honoured to be a part of that incredible team.

I suggest you buy the book right now. I’m sure the first 2500 physical copies of the hardcopy will fly off the proverbial shelves. Before you head off and pound Mark’s server with continuous refresh attempts, here’s another little preview of one of my spreads:

The fine art of saying hello