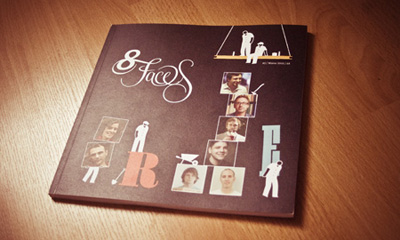 Today is The Big Day: that is, we’re opening pre-orders for #2 of 8 Faces.

I’m not going to say much else, except that it’s happening at 17.00 GMT and we’re expecting a very high demand, so be sure to get in there quickly to reserve your copy. We’re printing more this time around, but from the amount of emails we’ve got recently, new mailing list sign-ups, and the general buzz online, it looks like there’ll be even more of a demand than there was for #1.

As before, the actual copies will ship a couple of weeks later. You can also expect the same high production values as before: thick uncoated stock, a foil-blocked cover, and a very limited print run. And this time around, we’re upping the page count to 88. The line-up draws once again from the world of type design, graphic design, and web design:

Issue two also features cover artwork from Jez Burrows, an intro by The Ministry of Type’s Aegir Hallmundur, an article on uncial type by Linotype’s Dan Reynolds, a look at the type-heavy interface of Windows Phone 7, and the story behind printing Underware’s contemporary blackletter Fakir in blood!

For an exclusive preview (I took some photos of the first proof, albeit without the foil blocking), head over to The FontFeed.

The search for the perfect media centre