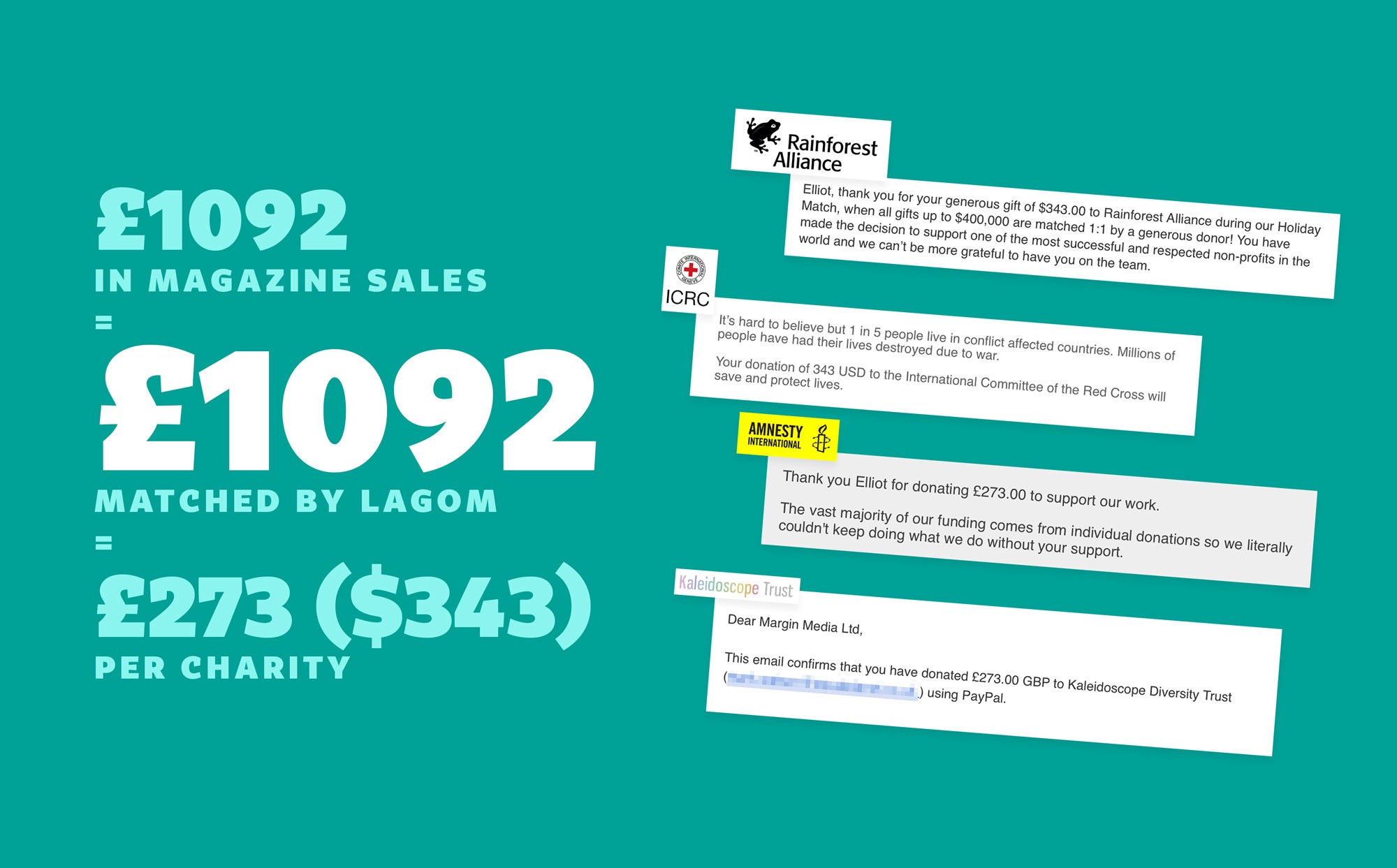 Crikey. 2016, eh? Personally and professionally, it’s been a lot of fun, but in terms of global culture, what a spectacularly awful year. I wonder — worry — that we’ll look back on 2016 as the year that society took the proverbial step off the precipice…

Anyway, in an attempt to end the year on a more positive note, we at Lagom decided to use the Black Friday / Cyber Monday sales period to do a little good and support the communities that had suffered — and, sadly, will suffer — directly and indirectly from the outcomes of the US election and the UK’s EU referendum.

We’d been giving serious thought about whether or not to do the whole Black Friday / Cyber Monday thing. Last year we’d staged a semi-silent protest by not offering any deals over the period, but this year we decided to try something different. 2016 has made it abundantly clear that there’s a great deal of negativity alive in the world today; values that we try to champion in the pages of Lagom — like inclusivity, sustainability, and transparency — are under threat. A culture of divisiveness has brought about these landmark events that stand against everything we (as people and as a business) represent.

So, it’s a small thing, but for the sale period we reduced everything in the Lagom online store by 50% and for every copy sold (whether it be a single issue, a PDF, or a subscription), we donated the other 50% to these four international charities:

Our thinking behind this was that, like most retailers, we’d still get to offer some great deals, but do so in a way that benefits vulnerable communities threatened by Trump and Brexit. In the interest of transparency, yes, we hoped that this move would also help Lagom gain some new readers, but our aim was to do that while helping others and not actually turning a profit on these sales.

The results were fantastic. We had a great response from our readers, who were incredibly supportive of our decision. Lots of you picked up subscriptions, our latest issue, and back issues for yourselves and for gifts. So we want to say a huge thank you for your kindness and support. We’re glad that our gesture resonated with so many of you.

In the grand scheme of things, it was a tiny result, but for us it felt like we’d been able to stand up to some of the year’s negativity, and do so with the confidence of our readers behind us. I hope we can do a lot more of this sort of thing in 2017.

Advanced Typography for the Web & Print

One week with the Google Pixel