Get away from your desk 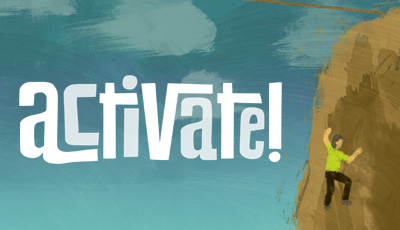 Working on the web is great. We can work from virtually anywhere and pretty much anywhen, too. But the flip-side of that is that we rarely get to connect with people in the real world and we’re often working at all hours of the day. If you’re freelancing or running a small company, those two points are exacerbated even further.

So what should we do about that? I often write about the work / life balance and I’ve finally decided to put my money where my mouth is. Spurred on by an idea suggested by my friend and frequent collaborator Dan Millar, we’ve teamed up to create Activate.

Yes, it’s another event. Yes, it’s aimed at designers and developers. But the difference is that it’s all about getting away from your desk, stepping into the great outdoors, and having a fun day out in the countryside; doing stuff like zip wiring, raft-building, off-road driving, and rope walking (or just taking it easy if you’d rather). Oh, and with beer, a BBQ, campfires, and an overnight stay in a tipi. It’s going to be great!

When you work in a corporate environment, fun days out are often a regular occurrence, usually with the aim of encouraging teamwork. But freelancers and small businesses don’t often get to do that stuff, so we thought we’d create the opportunity. Plus, for many people, conferences can sometimes be a daunting way of meeting your peers, so we want to make that easier by throwing people together into teams and seeing what comes out of it. Not for some corporate goal, but because it’s fun.

Come along and join us. There are only 100 spaces so that we can keep the size manageable, and the attendee list is already filling up with some fine citizens of the interwebs.

Aside: I designed and illustrated the site, but the Decode boys take the credit for the actual build, which features some fun CSS animations you might like…