First thoughts on the iPad 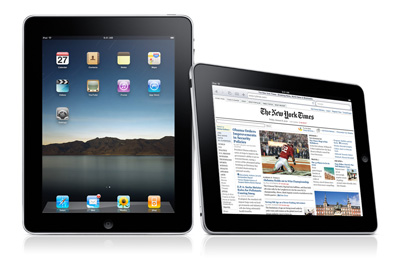 So, the day has finally come. The iPad has been announced. It actually exists and it looks unsurprisingly amazing. But I was surprised and disappointed by a few things, too.

The first big surprise was the name, of course: iPad — although obvious — was on the “there’s no way it’ll never be called that” list, wasn’t it? The next surprise (and slight disappointment, I must admit) was how obviously it all looked like a blown-up iPhone OS. Yes, that’s what the rumour mills had been talking about with a fair degree of certainty, but the major downside to that is that it means the basis of the iPad’s OS is a GUI originally meant for a smaller device. On seeing Mail, live-blogger Ryan Block commented that “there is like too much room,” and maybe he’s right. I guess seeing other apps in the flesh will decide that.

The biggest surprise, to me, was the emphasis placed on e-books (sorry, iBooks *). The fact that it’s going to kill the Kindle is now obvious, but shouldn’t it be adding a little more? The pessimist in me sees the e-book functionality as the iPad’s core, with all the extra stuff added as fluff to make it appear that it’s not just an e-book reader. I guess I was expecting a bit more.

But I’m being negative. By and large, this looks like a pretty incredible device. That goes without saying. Maps in particular looks lovely, as do all the video and game demos. The dual-pane display on Mail will be helpful, although I’ll remain sceptical about the reality of typing on the iPad until I’ve tried it: the sad truth is that touchscreen typing isn’t that fun. Even after two years of owning an iPhone and getting as used to the keyboard as I could possibly get, I’d much rather type on my MacBook Pro. The keyboard dock for the iPad looks great for moaners like me, but if you’re in the scenario where you’re able to use the keyboard dock (home, office, train, etc.), wouldn’t you just use your MacBook instead?

While we ate dinner and followed the announcement, Sam asked me: but if you have an iPhone and a MacBook Pro, why would you need an iPad? It’s a good question. Perhaps if you don’t have a laptop it’s a great way to own a second, more mobile computer that’s more powerful than the iPhone (and that’s sure to win over a number of ‘switchers’ from Windows land) but is there really a need for a third, in-between semi-mobile computer? Perhaps not.

I’m trying to imagine the situations: at home, in the office, I have my MBP hooked up to the 24" LED Display and various hard drives so to all intents and purposes it’s a desktop, but I can take it with me when I’m travelling (which I do a lot) and that’s why I love having the flexibility of a laptop. But would I use an iPad when I’m working on the train? No, I’d use my MBP. What about that other common situation, where I’m sitting in front of the TV at night — having taken the MBP downstairs — casually replying to emails or surfing the web (as I am now)? Would I use an iPad then? No, probably not. Apart from the very small inconvenience of having to disconnect the drives and display, I’m pretty sure I’d continue to use the laptop on almost all occasions. Ok, so what about on very small train journeys where it’s not worth getting out the laptop? In those circumstances I usually use the iPhone to reply to emails and I guess that would be an instance where it’d be preferable to do it on an iPad. But is that it?!?

I hate to say this, but I’m honestly struggling to think of situations where using an iPad would be more appropriate / useful / fun than using either my MBP or iPhone. So again I’m forced to ask the question: is there really a need for a third, in-between semi-mobile computer?

I’m disappointed that the iPad isn’t a device that can dock with another Mac. I feel a little let-down that’s not being quite as ground-breaking as I’d hoped. And I’m concerned that there may not be an actual need for it (I guess only time will tell). But have Apple created another gorgeous device? Yes. Have they pushed yet more UI design boundaries? Yes. And have they come through and delivered it all at a reasonable price? Amazingly, yes. So I’m still pretty excited.

I’m prepared to admit that — as a self-confessed Apple fanboy and a designer with a soft spot for all things pretty — the device’s beauty is possibly overpowering my logical reasoning, but the iPad really does look like an amazing piece of kit and it’s one I can’t wait to try out, as that’s the only way these concerns might be confirmed or quashed. Is it actually worth buying? It’s simply too soon to tell.

* Er, haven’t we done that one, Apple?
** If indeed that applies to UK availability, which sadly it may not.