Win a special edition of 8 Faces 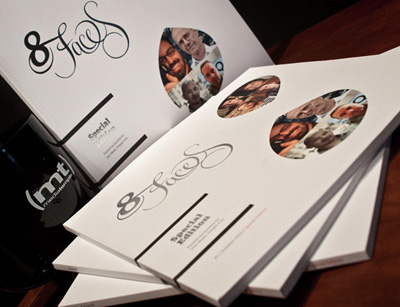 Even though issue one of 8 Faces has sold out, there are still ways you can get your hands on a copy. And not just any old copy, either. I’m talking about the Special Edition: a limited run of 50, printed exclusively for (mt) Media Temple, who sponsored the debut issue.

Plus there’s a chance to win a couple of ‘regular’ copies from the original print run (that we intentionally kept aside) at this year’s Build. More on that in a second.

In addition to the main print run of 1000 copies, we also printed two special editions. The first was a limited run of 50 (individually numbered, as per the main edition) that were shipped directly to (mt) for them to give away to their VIP customers. This week, they’re running a competition on their blog where they’ll be giving one away every day for the next four days.

Here are some photos they took, which show off the alternative cover. There are a few subtle differences, but the main one is that the barcode is replaced with the foil-blocked words ‘Special Edition’, followed by, ‘Printed exclusively for (mt) Media Temple VIPs’:

To be in with a chance to win one of these, head over to the (mt) blog.

To say thank you to our contributors (writers, designers, artists, developers, transcribers, advertisers, etc.) we printed another special edition. It too was a limited run of 50 and in essence it’s very similar to the (mt) edition: it has the same additional foil blocking on the cover, except that the text below reads, ‘Printed exclusively for those who made this issue possible.’ I’m afraid this one isn’t up for grabs: it really is reserved only for contributors, as well as friends and family. Kyle, who co-designed and built our website, posted a photo of his copy on Flickr:

(That’s not gold foiling, by the way; just the light reflecting in the silver.)

A competition for Build attendees

I’m really looking forward to this year’s Build conference, which is happening in Belfast on Wednesday 10th November. There are a number of fringe events happening either side of the conference, including an evening with 8 Faces interviewee Jessica Hische, and ‘The Standardistas Open Book Exam’, which has a crazy amount of schwag as its main prize. Two copies of 8 Faces (left over from the original 1000 print run) are part of that prize, and the Standardistas have a full run-down on their blog.

In addition to The Open Book Exam, there will also be a very special 8 Faces announcement at Build. I’ll be on stage on the main day to reveal all…

The fine art of saying hello