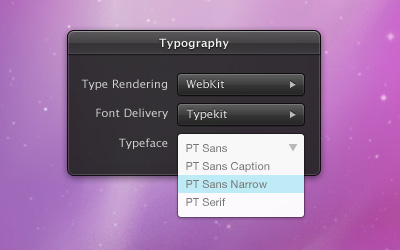 [UPDATE 1: Daniel Rhatigan has pointed out that fonts.com allows the download of installable fonts when web font licences are purchased. So that’s one answer to the problem.]

[UPDATE 2: FontFont are also now supplying ‘comp fonts’ with every web FontFont purchased. This is essentially an installable desktop font with a licence that only allows the font to be used in design comps of the website for which it has been purchased. A great idea! Hats off to FontFont for extending such trust to the web designer.]

I feel like I’m always using this phrase: ‘It’s an exciting time to be working with web type right now.’ But it’s true, isn’t it? With enhanced browser support, the refinement of font delivery services, intelligent discussion surrounding screen rendering, and the emergence of a set of standards, it really is an exciting time for typography in web design.

Of course, we still have a long way to go, and one particular problem is that there is currently no way to create a design in a desktop application like Photoshop using fonts licenced for web use. Or, to put it another way: ‘I don’t want to buy an expensive desktop licence for a font family I only want to use on the web!’

Before I go any further, here are some quick points:

Proposal 1: Try before you buy, based on trust

Although not specifically related to web fonts, Underware have a very interesting model, whereby they send potential customers a sample CD containing all of their typefaces, and allow designers to try the fonts out. If they use them for a project, it is then up to the designer to be honest and purchase a licence from the foundry. This trust-based model is a brave move, and although Underware should be commended for such bravery, it’s understandable that many foundries just don’t see this as an option. It’s a shame, because this could solve the entire problem I’m talking about here, but sadly we don’t live in a world where people can be relied upon to be trustworthy.

Dan Millar and I are doing a lot of work together at the moment, and while discussing our current project the other day, he came up with this idea: what if there was a plugin (for Photoshop, Fireworks, Illustrator, et al) that added support for web fonts directly in the application? I like this idea a lot. Perhaps Photoshop’s fonts menu could then look something like this:

It could even work without attempting to make the fonts installable (which web fonts should not be, of course). What if a new option existed that — instead than reading from the user’s internal font database — pulled in type from a font delivery service? In reality, it would be no different than using the online ‘type tester’ tools we’re used to seeing on foundries’ websites or in services such as Typekit and Fontdeck; except that the type tester would be fully integrated into the design app. The type frame might then look something like the following:

There’s another advantage to moving the typeface-choosing process to the cloud: you could then design on multiple machines without the need to carry your personal font collection around with you. Admittedly that’s not a huge win if you — like I — store your library in your Dropbox folder, but it would mean the end of scenarios like this:

The trouble with the plugin proposal above is that it’s essentially a hack. Even if we saw a feature like this incorporated into a future version of Photoshop or its ilk, for me that would still not seem like the best possible solution. Why? Because the best possible solution would be to create an entirely new design app that had this kind of stuff built into its core. Just think of the possibilities:

Last year, Jason Santa Maria wrote an excellent blog post in which he highlighted the need for a real web design application and mentioned the desire to use external fonts and / or the WOFF format. I’m behind him all the way. Everyone agrees that Photoshop is not really suited to the web, and it’s fair to say that Fireworks — despite its purpose as a tool for screen-based design — falls short. Ironically, it’s InDesign that comes closest, with its style-specific menus that — as Jason pointed out — are much closer to the way we work with CSS than anything present in current versions of Photoshop or Fireworks.

It’s my firm belief that a new app created specifically for web design would be snapped up in an instant by virtually every designer in our industry. At the very least, I think there’s a very real need for a tool that displays typeface choices via an online service and, importantly, renders the fonts using an actual browser rendering engine.

If the right people got together and set the wheels in motion for this to become a reality, we could make this happen.

[CREDITS: The blue ‘web’ button shown in these mock-ups is based upon the one used to indicate a web font licence on MyFonts. The hypothetical new app’s UI was mocked-up using elements from Vinilla.]