Getting things done with TODAY ▼ + SOON ▶ 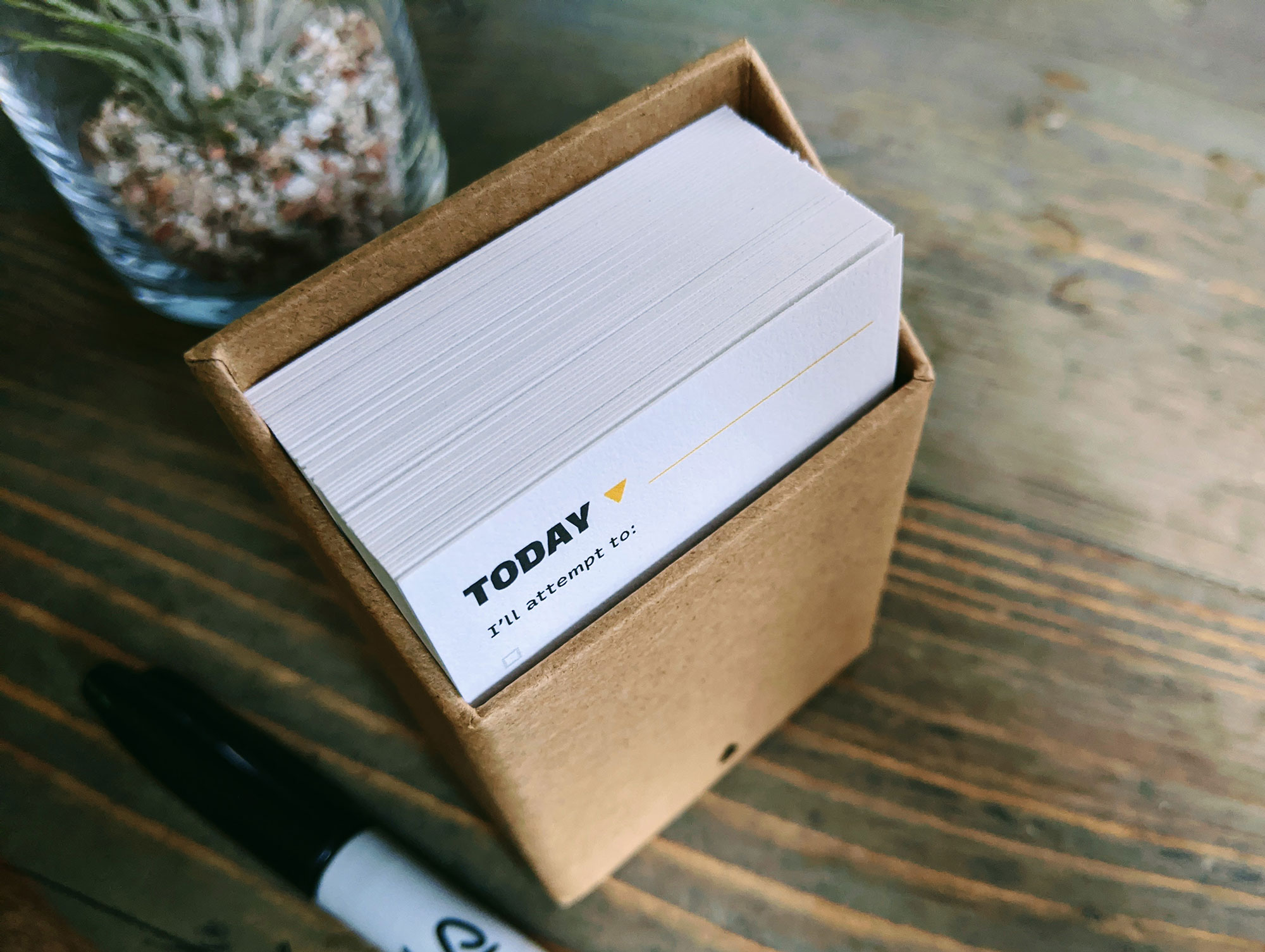 I’ve always been a big proponent for digital getting things done tools, and over the years I’ve settled on Things as my app of choice. In fact, it‘s probably the only iOS-only app I miss since switching to a Pixel back in 2016. But recently I’ve taken to supplementing my Things workflow with something altogether more lo-fi: a single Post-It note, filled out with each day’s tasks every morning, and stuck to my iMac for the duration of the day. For whatever reason, having an analogue to-do list to check off has helped boost my productivity no end.

So, during lockdown, my attention was naturally drawn to Jeff Sheldon’s recent Kickstarter project Analog — a card-based to-do system that has since hit its funding goal by over 8,000%. I love the look of Analog, and had my finger hovering for a while, but unfortunately the project arrived just after the economic effects of the pandemic took my job and I couldn’t quite justify the cost of buying Analog when I already had a half-decent thing going with the Post-Its.

But Post-Its are so… meh. I knew I needed something in between, so I turned to good ol’ Moo and designed something as a test.

Although many #gtd systems revolve around the concept of ‘today’, ‘next’, and ‘someday’ (or similar), I wanted to keep mine as simple as possible, and stuck to just ‘today’ and the somewhat amorphous ‘someday soon’. The idea was to mainly focus on tasks that needed completing today, and bundle everything that wasn’t an essential task for that day into the ‘someday soon’ bucket. I also had the bright idea (read: it wasn’t actually a bright idea in the end) to reduce wastage by having ‘today’ on the front of each card and ‘someday soon’ on the back. More on that in a sec.

Since these were my own cards, I had the freedom to tailor them to exactly what I knew worked well for me, so rather than have a long list of empty checkboxes, I built in a separate section for tasks that were slightly less important, and need only be completed today if there was a time. I also decided to use language that was realistic. We all know we very rarely complete everything (sometimes anything) we set out to do each day, so by way of introduction to the day’s tasks, I wrote “I’ll attempt to:” for the primary list, followed by “and, if there’s time:” for the secondary one. Let’s be honest about our intent, right?

The language used here has another function, too: I want to force myself to write more meaningful to-dos. So, instead of a list that might read something like…

As well as being more meaningful, it’s also afforded me the freedom to write a phrase like “work on” in front of the task. Sounds insignificant, doesn’t it? But rather than being unable to check off a task until it’s completed, you get to check something off just for working on it! That task might be on your card every day for a couple of weeks, but if it‘s framed as a task you’re working on, you get to check it off every day — and, trust me, it’ll do wonders for your sense of accomplishment.

(I’ve read some counter arguments here that also make a lot of sense, but like I said, I got to be selfish with this project and tailor these cards to the needs of my own psyche.)

The v1.0 cards arrived and I was excited to get going, but there was a problem: I’d got them printed on Moo’s default uncoated stock, which isn’t suitable to write on. I complained (because the stock is advertised as being writable-upon), and Moo very generously offered a free reprint, but this time on their Cotton stock. The replacements arrived and v1.1 worked wonderfully… for a while.

There were two problems that came to bother me over time. The first was that my bright idea to have ‘today’ on the front and ‘someday soon’ on the back actually resulted in me only re-using one or two cards for their ‘someday soon’ functionality — you just don’t need that many cards for those long-term goals, it turns out. The other thing was the design: on the whole, it worked, but the arrow shapes felt a bit dated and I hadn’t fully utilised the Recursive type family: I’d opted for the monospaced version instead of the sans, and with a whole load of options to play with via Recursive’s Variable Font, it felt like a waste.

So, with v1.1, I’ve now got a version that I now feel 100% happy with, both from a practical and typographic standpoint. Moo allow you to have multiple back designs, so my latest order has ‘today’ on 100% of the fronts and 75% of the backs; the ‘soon’ design appears on only 25% of the cards’ backs. Oh yes, and ‘someday soon’ always felt a little clumsy, so that’s now simply ‘soon’. That enabled me to give the project a neat little brand: TODAY ▼ + SOON ▶

Although TODAY ▼ + SOON ▶ was created purely to scratch my own itch and is designed for me as the sole user, it’s possible others might find this useful, so I’ve made the artwork publicly available on GitHub. Note that it’s set up for use with Moo’s 84mm × 55mm business card template and, again, I recommend printing on their Cotton card stock.

Without question, I’m being far more productive during my work day by using the TODAY ▼ + SOON ▶ system. If you decide to try it out for yourself, I hope it works as well for you, too. Let me know on Twitter if so.

Behind the scenes of Maido’s rebranding