The cloud-centric Mac set-up: 8 months on 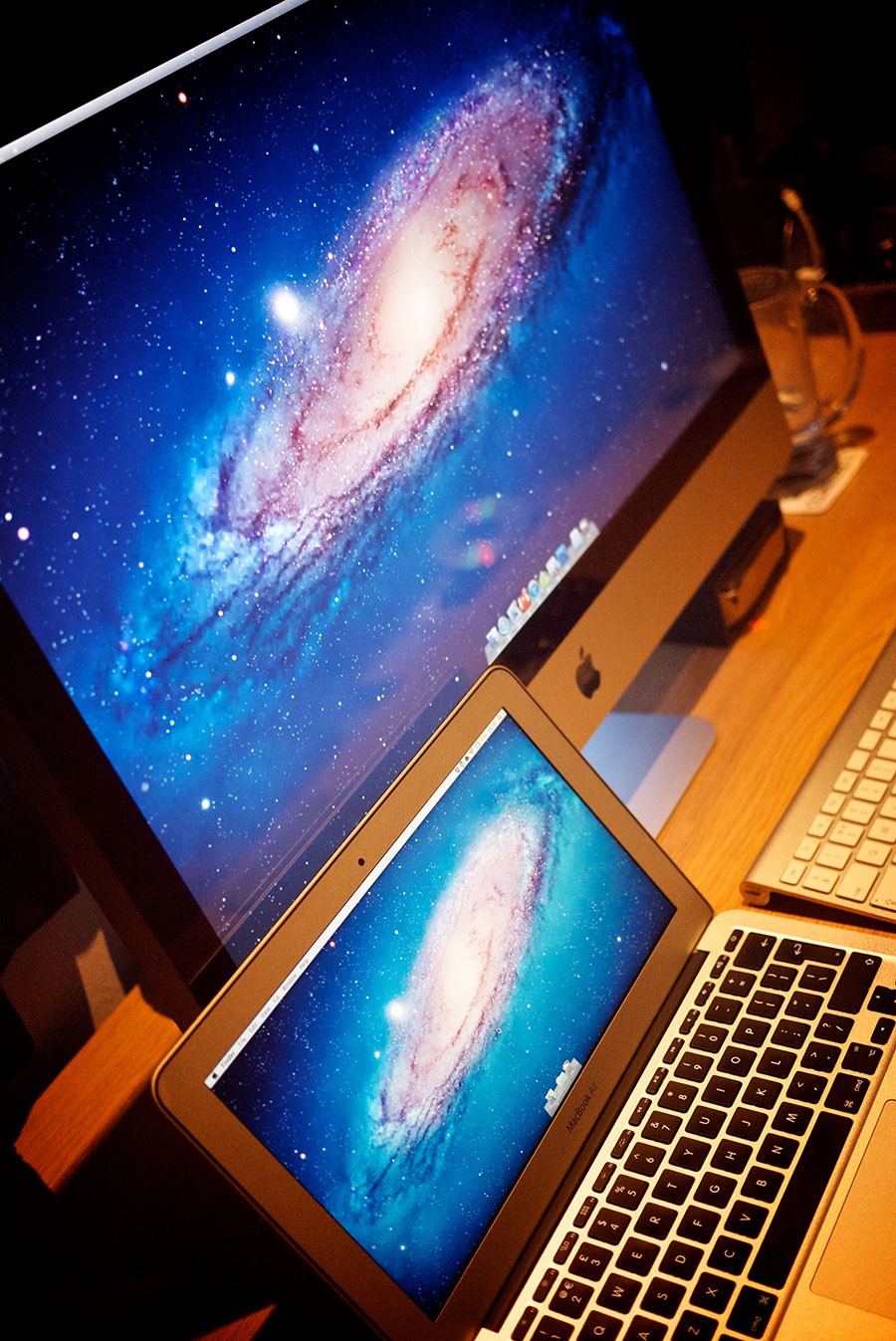 Recently, quite a few people have been asking me how I’ve been getting on with my MacBook Air and iMac set-up, which I got about eight months ago after blogging about my plans for ‘a cloud-centric Mac set-up’ way back in April last year. In short: I couldn’t be happier. If you’re thinking of doing the same or simply want to read a bit more about this set-up, read on…

The definition of the cloud

When we say ‘the cloud’, we tend to think of Dropbox, and whilst it’s true that Dropbox is very much the key to keeping my two Macs in sync, there’s more to it than that. The thing that many people forget is that we’ve actually been living in the cloud — to some degree — for quite some time: IMAP email, for example, is one of the oldest and most common examples of data being stored on servers to allow access from multiple devices. So if you’re thinking of going to a two-or-more Mac set-up, you’ll be pleased to know that you’re already a fair way there. (Unless you’re using POP3, of course, in which you case you really need to get out of the 16th Century.)

There are many other elements of the cloud that we’re already using on a day-to-day basis that have nothing to do with Dropbox; activities such as reading our Google Reader feeds with an app like Reeder; or using online (as opposed to local) services, like listening to music on Spotify or Rdio. Taking your entire set-up to the cloud doesn’t actually take that much more effort.

The check-list for a cloud-based set-up

If you’re thinking of going the same route as me and getting two (or more) computers with the intention of keeping them in sync, here are some steps I recommend you take:

Every application is different and will therefore each will have its own nuances when it comes to cloud-based syncing. In my experience, I’ve only experienced very slight hurdles with two applications: FontExplorer X and TextExpander.

Font organisation is something of a dark art at the best of times, which is why I use FontExplorer X in the first place, but syncing via Dropbox does unfortunately add another layer of complexity. Initially I’d thought I could simply store my FEX fonts folder within Dropbox, but for some reason this caused some conflict issues where FEX thought it couldn’t find certain files even though they were there, possibly due to the application preferences not being synced. After some fiddling around that lead nowhere, I eventually opted to store the fonts folder within my default user folder; in other words: outside of Dropbox. Unfortunately this means that syncing is a manual procedure, which involves me making a semi-regular back-up from the app’s preferences panel and storing that back-up in Dropbox, ready to be launched by the app on the other Mac. It’s not as bad as it sounds, because although it’s not automatic, the back-up can contain all of your fonts as well as your preferences. But yes, of course I’d like FEX to implement some proper Dropbox syncing.

TextExpander syncing is in a remarkably similar position, but is slightly more confusing in that TextExpander does actually offer Dropbox syncing out of the box. The problem with that, though, is that it uses a folder than has to sit in the root of your Dropbox, which slightly frustrates a pedant like me who wants everything stored neatly in its designated place. The solution, thankfully, is pretty close to what I do with FEX: I generate back-ups to a folder that lives wherever I want it to live inside Dropbox, and then launch those back-ups on the machine that needs to sync. Again, not that graceful, but one advantage is that TextExpander can generate those back-ups automatically.

There’s one other application-related downside: the rather arduous task of having to install apps twice. For most apps it’s an easy task, but the doubled time spent installing Creative Suite was something of a chore, to say the least.

The downsides mentioned above paint a very clear picture of where cloud syncing needs to go: we need to stop worrying about files alone; we need preferences, installations, and in fact every type of data to be transportable. The recent update to Tweetbot is a great example of that, from keeping muted settings synced across devices to remembering your place in the timeline. As I said back in my original post about moving to a cloud-based set-up: you’re effectively only changing the chassis. The device itself is becoming less and less relevant.

(As an aside, quite a few people have asked me how I feel about security, since Dropbox has been hacked in the past. Personally, I’m not concerned at all. If my account was ever hacked and someone got access to my PSDs, it’s not the end of the world. If you have particularly sensitive information on your computers, you might disagree.)

Lastly, on a non-cloud-related point, one of the questions I get asked again and again is: ‘how does the Air perform with Photoshop or [insert name of another processor-intensive app]?’ And my answer is the same every time: amazingly. In fact, I’ve yet to notice a performance difference between the Air and the iMac, even though the latter is significantly more powerful in terms of spec. They both run on SSDs, which is possibly the biggest contributor to speed. Even my old MacBook Pro was like a new machine once I’d put an SSD in it. If you’re buying a computer today, make sure you pay the extra to get an SSD because it really is the best upgrade you can perform.

Both computers are a joy to use and even more so for sitting at the extreme ends of the spectrum: the iMac for its ridiculously huge screen and connectivity; the Air for its über-portability. This is — without a doubt — the best computer set-up I’ve ever had. If you’re thinking of doing something similar, do.

Tomorrow’s web type today: The fine flourish of the ligature