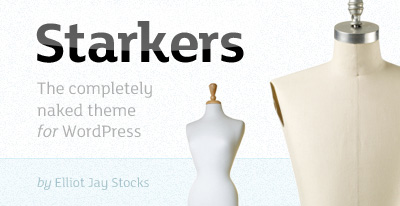 I’m happy to unveil the new version of Starkers, my bare-bones theme for WordPress. An update has been due for quite some time, but this isn’t just a compatibility release; Starkers has well and truly grown up.

Most importantly, it now has its own dedicated site (resize the browser window for the fun stuff, and view in Safari for the most CSS3 enhancements) rather than living in the occasional blog post. I’ll be investing a lot more time into the project from now on, so expect to see some big news on where Starkers is heading fairly soon. For now, though, hopefully you’ll be satisfied with the new version (it’s been re-written from the ground up, using the Default theme that ships with WordPress 2.8.1 as a starting point) and the more extensive information offered on the new site.

If you’d like to contribute to the Starkers project in any way, please do get in touch. Specifically, I’m looking for people who have some time to add support for threaded comments, increased accessibility ( Al Stevens, I’m looking at you!), code indentation improvements, and any suggestions that will help make the theme better without becoming bloated. And of course I’m always happy to hear about any bugs you find.

Comments are open and I’d love to hear your feedback. Personally, I’m really excited about where Starkers is going to go, as I have some more cool developments on the way. Enjoy!

‘How to design a portfolio site’ screencast