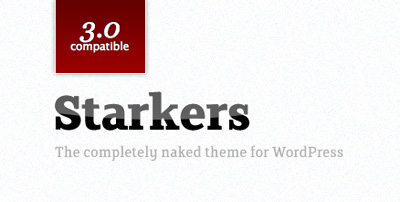 For a long time now, people have been asking when I’d update Starkers. The previous version was incompatible with the last few releases of WordPress, but I’d decided to freeze development for a while, knowing that WP3.0 — and with it a new default theme — was just on the horizon. Now that it’s finally out and the Twenty Ten theme has been released into the wild, I’m happy to announce that Starkers has been reborn, now with full 3.0 compatibility.

Previous versions of Starkers were based on the ‘Default’ (aka ‘K2’) theme that shipped with WordPress. Now that the theme has been retired and replaced with Twenty Ten, it seemed logical to use that as a starting point. Thus, Starkers has been completely rebuilt from the ground up.

Twenty Ten is a relatively powerful theme with some advanced options for customisation, but this comes at a price: the theme — just like Default before it — is littered with divs, spans, and all kinds of classnames and IDs. They’re all very useful when using the theme as it’s intended, but when it comes to creating your own themes from scratch, a cleaner, stripped-back framework makes more sense as a starting point. And that’s where Starkers comes in.

I may have missed a few things here and there, so as with everything that’s new, please don’t expect this to be perfect. I meet so many people who use Starkers (it always amazes me that it’s so widely used!) and I love hearing from those of you who use it, so if you’ve got any feedback or suggestions about the new version of the theme, please do get in touch, either in the comments below or via email.

See, I told you I wasn’t turning my back on WordPress!