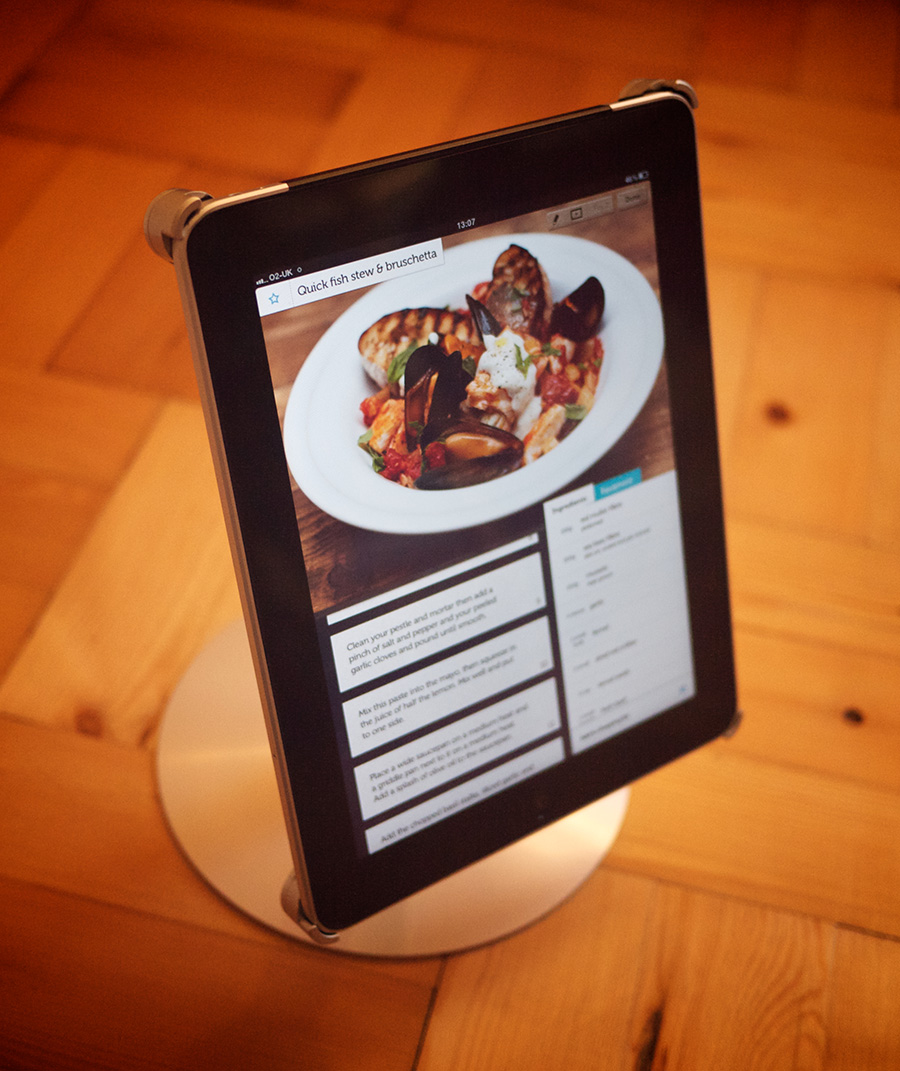 Do you make cool stuff? Send me your product and in return I’ll give it a fair, unbiased review on the blog, along with some photos.

Just before Christmas, I received an early present in the post: the Mantis Stand for iPad, courtesy of the folks at Flatscreen Arms. Such a generous gift definitely deserves a review!

The first thing that struck me about the Mantis Stand is its level of Apple-like craftsmanship. The whole thing is solid aluminium and sturdy as hell. The balance is spot-on: enough weight to stop it from being knocked over, but light enough to move around easily.

I was half-expecting the swivel to feel awkward, like it does on many stands, but this, too, is spot-on: rotating between portrait and landscape orientations is incredibly easy and yet nothing feels loose. It’s the same when adjusting the angle of the tilt: everything feels just right. That’s extremely handy for when you want to lie the iPad flat, like when you’re playing two player games.

One thing that really surprised me is just how usable the iPad is when docked in the stand. So usable, in fact, that I’ve hardly ever taken it out. It’s great for flicking through your feeds over breakfast and my neck feels so much better for not straining to look down at the iPad sat on the table.

To be honest, though, my favourite use for it — as you may have guessed from the header photo — is in the kitchen: pop the stand next to your ingredients on the worktop, fire up your recipe on a web page or cooking app, and away you go!

I couldn’t be happier with this stand. In terms of both aesthetics and usability, it’s brilliant. Wonderful, in fact. I don’t ever want to part with this stand. However, it would be remiss of me to avoid mentioning its price, because — at £99.99 — it’s not cheap. In fact, it’s a sizeable chunk towards a new iPad! But if you’re in the market for a premium iPad stand, it’s worth the cash. Considering the material and craftsmanship, it’d be hard to imagine them being able to sell them any cheaper.

One other thing I should probably note is that it’s worth making sure you get the right one — I was sent the iPad 2 version and it’s resulted in my iPad 1’s corners getting ever-so-slightly damaged. But hey, that’s entirely my own fault.

All in all: highly recommended!

Many thanks to Dan Lindfield and the folks at Flatscreen Arms for making this fantastic stand, and of course for sending me one! You can view my hi-res photos on Flickr.