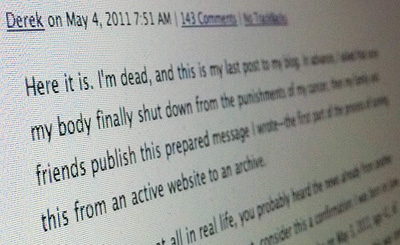 Yesterday afternoon on Twitter, a significant number of people I follow were linking to Derek K. Miller’s ‘Last Post’, published on his blog by relatives after his death to cancer. It’s a touching story and, like many, I found myself mourning the loss of someone I never knew. Go and read it now, and then come back here.

Derek’s post — as well as being beautifully written — highlights an issue that I’ve been (perhaps morbidly) thinking about for some time now: as we increasingly live our lives online, with our everyday habits documented across the universe of social networking sites / apps, and our long-form thoughts detailed on our blogs, what happens when we die?

As unfortunate as Derek was to suffer from cancer, he was fortunate in one way, in that he knew his death was coming: he could prepare for it mentally, and he could prepare for it socially, by composing that all important blog post, ready for his family to publish on his behalf once he finally went. If I ever found myself in a similar situation, I would no doubt take a similar approach.

But what of those people killed suddenly, with no warning? What happens when that stream of web-based activity suddenly stops?

Perhaps we need some sort of system in place that allows our next of kin to access our blogs, Twitter streams, Flickr photos, et al, and make the necessary announcements. Maybe that’s a fully-functional web app, or maybe it’s a modernised version of a will. Either way, I’m not suggesting that our online activity is anywhere near as important as our actual physical death; rather that we should perhaps consider fool-proofing our exits from this world and offer a sense of closure to those left wondering where we might’ve gone.

I feel inspired by Derek’s foresight.

A preview of Codex: the journal of typography