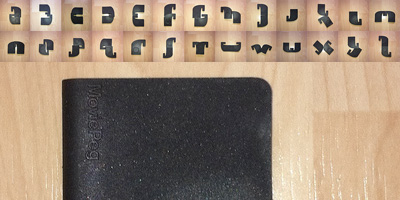 On Friday I received a gift in the post from Brendan and the lovely people at mN: their new MoviePeg for iPad. It’s a great little bit of kit and I was amazed that something so simple can do such a good job of propping up the iPad, whether it’s for movie-watching (its original intention), a marathon email session, or pretty much anything else in between.

However, while fiddling around with the two parts of the MoviePeg over breakfast this morning, I found that it has another, unadvertised function: a revolutionary type design tool!

Ladies and gentlemen, I present to you… the MoviePeg alphabet!

It’s true that I’ve done a fair bit of cheating here: the MoviePeg’s hooks are used as mere serifs in some letters (R, V, etc.) and full-on construction blocks in others (A, S, etc.). Plus there’s a mix of lowercase and uppercase throughout and a lot of liberty-taking (H, anyone?), but this is just a bit of fun. If you have alternative ideas for certain glyphs, please feel free to link them up in the comments below!

Ah, the things one does when one should actually be filling out a mortgage application form…

Win a special edition of 8 Faces