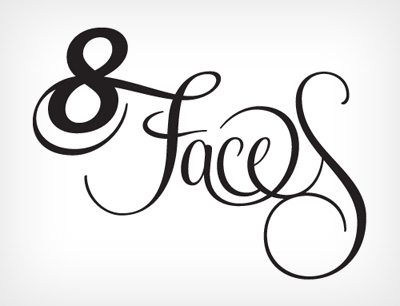 Last week, I gave away a few teasers about my magazine pet project. Today, I’m going to give you something a bit juicier. I’m very happy to introduce… 8 Faces.

The magazine takes a very simple concept as its initial talking point: if you could only use eight typefaces for the rest of your life, what would they be? A sort of ‘ Desert Island Discs’ for type, I suppose. Each issue asks this question to eight leading designers whose work is well known for its typographical slant, be they print designers, web designers, or type designers. But this is really just a point of focus and proverbial ice-breaker; the interviews then expand into open-ended discussions about all things typographic and are punctuated with examples of the designers’ inspiring work.

From the moment I had the idea, I knew I wanted to interview some very well-known designers, so I emailed eight of my type heroes, not expecting to hear back from most of them. To my astonishment, they not only replied: they said yes! So here’s the list of interviewees appearing in the debut issue:

- David Carson — ground-breaking and massively influential print designer (his packaging design for NIN‘s album _ The Fragile_ was what got me into design when I was at high school, so on a personal note it’s a real honour to have David involved)

- Jos Buivenga — new breed of type designer, whose beautiful fonts and ‘freemium’ business approach have shot him to fame

- Ian Coyle — web/print designer and letterpress printer, whose participation on the SXSW 2009 Typography panel inspired the idea for the magazine

It’s an absolute pleasure to have these people on board. I’ve also got some very exciting people potentially lined up for #2, but let’s not get ahead of ourselves…

There are many more details to follow and I’ll be revealing more in January, but for now, please sign up on the 8 Faces site if you’d like to hear more. I promise you won’t be spammed, and signing up will guarantee that you’ll find out about the magazine’s availability before anyone else. And yes, there will be pre-orders!

A pet project in the works