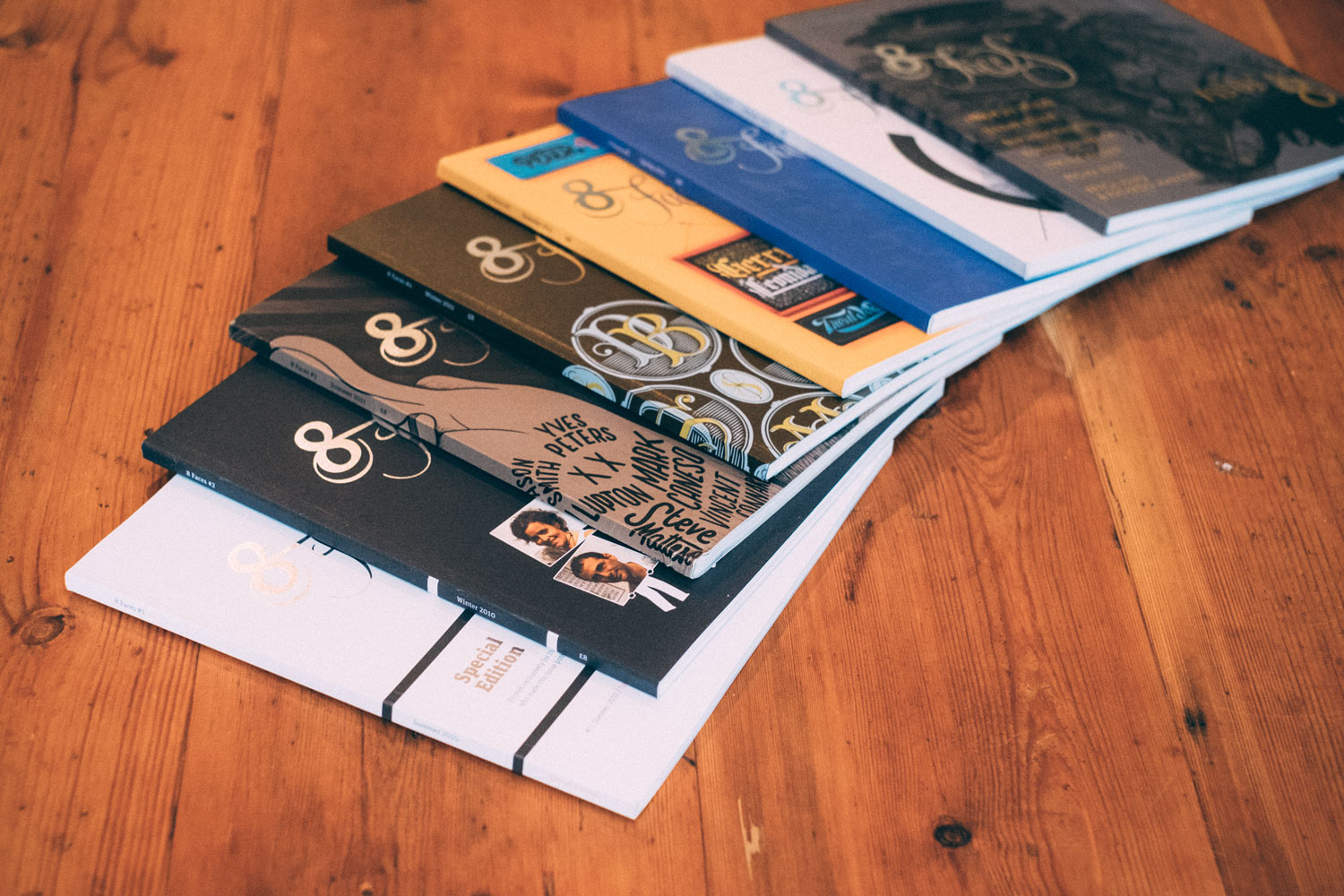 Back in 2010, I was a jobbing web designer, and every time I tried to assemble a portfolio, do a presentation about past work, or just look back at something I’d made for reference, I found that a large chunk of my work had disappeared. Even with my own backups, keeping some sites alive meant replicating client databases on a separate server and… ugh, it was a pain. It’s still a pain. That’s the ephemeral nature of the web: things change and things disappear. But I’d grown frustrated of this situation; I felt like my work had no permanence. If only I could create something that would last. Something real!

8 Faces was a typography magazine I founded that year to do just that. And, looking back at it now, launching a printed magazine at such a time seemed like total madness: we were at the height of the excitement for iPad magazines and it was more or less agreed that print was dying a not particularly slow death. This was before the indie publishing revolution kicked off; there was no Offscreen, no Cereal, no The Great Discontent. On top of that, I had virtually no experience of print design. Some CD packages, the odd poster here and there — that was about it. And as for editorial experience, well, it was non-existent. I’ve always written for books and magazines, but I had absolutely no clue whatsoever about running a magazine,or managing contributors, or bringing in advertising revenue. In many ways the project was doomed for failure.

But, for whatever reason, it didn’t fail. Far from it. I created the first issue, launched it into the world, and it sold out within a couple of hours. Apparently print wasn’t dead. Apparently there were enough type lovers out there to constitute a readership. The motivation behind 8 Faces had been selfish: I’d wanted something that I could put on my bookshelf and I’d never really expected anyone else to care about this project, but apparently they did. And so, just like that, I was running a magazine.

It was always my intention to create just eight issues of 8 Faces and I did that over the course of the following four years, gradually building up a team of trusted contributors and turning it from a side project into an actual business. It never allowed me to give up client work, but it allowed me to be very picky about the kind of client projects I took on, and it got me into the type world: becoming a friend to type designers, a partner to type foundries, a speaker at typography conferences. It also led directly to be becoming the Creative Director of Typekit in 2013, I later found out from the people who employed me at Adobe. And, perhaps most importantly, it opened my eyes to the world of publishing and all that it involves (who knew that designing the magazine is such a tiny piece of the puzzle?) and therefore to where my current focus is with Lagom. I owe a lot to 8 Faces and the people who supported its run, and I’m still amazed that we sold out of all eight of our issues.

But even when I was putting together the last couple of them, I knew that wouldn’t really be the end of 8 Faces — I even put ads in our last two issues about how we’d be releasing a book in the near future. Well, it turns out that the future wasn’t quite as near as I’d planned (life has a habit of getting in the way of side projects, doesn’t it?), but here at last, in autumn 2016, the book known as 8 Faces: Collected is here.

Or, more accurately, the means by which we might bring about the book’s existence is here: the all-important Kickstarter campaign.

The foundation of 8 Faces: Collected is, as you might imagine, the eight issues of the magazine — but it’s so much more than that. It might be because of my web background and love of responsive design, but from very early on in 8 Faces’ run, I realised there were so many things I’d change. Some were subtle, such as the way our design system gradually evolved (changing point size and tracking, unifying the colour palette, etc.) and others were obvious: in the very first issue, I designed the ‘eight favourite typefaces’ spreads myself and made — I’m not afraid to say — a poor job of it. I realised my mistake and employed other people to take over the spreads (first Jon Tan and then Stefan Weyer), but I’ve always wanted to go back and totally re-do the spreads from that first issue. So that’s exactly what we’re doing: Stefan will be redesigning them and he’ll also be tweaking some of the other issues’ spreads to correct mistakes, improve legibility, and just generally bring everything up to an equal standard. The interviews — i.e. the bulk of the content — will be redesigned from the ground up, and will be edited and updated.

And then there’s the blog. I teamed up with Jamie Clarke (himself a former web designer, now designing typefaces) while 8 Faces was still running to create the ‘Type Worship’ blog. It’s gone from strength to strength and currently has over 220,000 followers on Tumblr. Some of that content is so popular — and so vital in terms of the more educational posts — that it deserves to exist in a printed form.

And so 8 Faces: Collected is going to be a huge, beautiful, hardcover book with over 500 pages that collects the re-designed and re-edited content from all eight issue of the magazine (which includes numerous essays and forewords as well as all the interviews), previously online-only content from the blog, and brand new content created especially for this very special volume. But this artefact simply will not exist unless we reach our funding goal. We have a relatively high goal because the book is going to be very expensive to produce, both in terms of physical printing costs and contributors’ time required to write, edit, and design it. After our first day, we hit 26%. As I write this, just two days in, we’re at 34%.

I’m amazed by that and am deeply grateful for the generosity of everyone who’s backed us so far. But we have a lot of work ahead of us and would appreciate any support you can offer. Let’s make this beast!