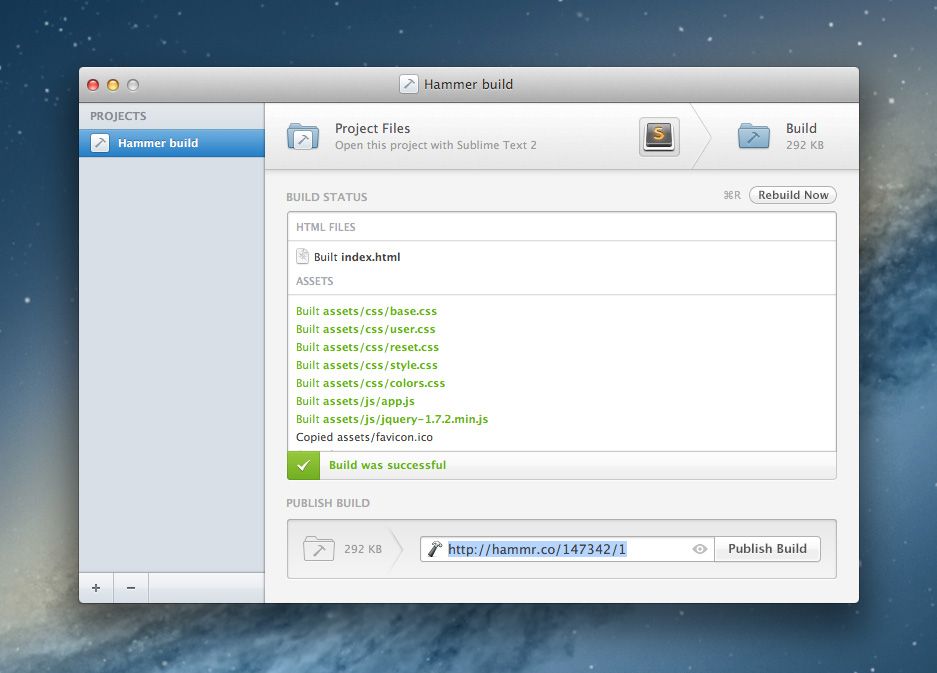 Last week my friends at Riot released Hammer, an OS X app I’ve had the pleasure of beta-testing for the last fortnight or so. I’m spreading the word about the app’s release because I think it’s bloody brilliant and it’s massively sped-up my local dev work on my current project.

Hammer, in a nutshell, is a compiler that runs whilst you build sites locally, allowing you to do a whole load of dynamic-ish stuff with static files: includes, variables, ‘current’ classnames for navigation links, intelligent asset paths, auto-reloading, SASS compiling, published links for client-viewing… it’s great. For a more thorough overview with screenshots and code samples, be sure to check out Design Shack’s review.

A few people have missed the point of what Hammer is actually intended for, so if you feel like flaming, I’d advise you to read Andy’s blog post on the subject first. I’m in exactly the same camp as Andy: I’m a designer who designs in the browser with markup and CSS, but I sure as hell don’t want to deal with the command line for simple tasks. Plus, with MAMP often refusing to start Apache on my machines, I welcome an alternative. And I must admit, although I love Codekit for SASS and JS compiling (and auto-reloading), I no longer need it now that I’m running Hammer.

Let’s also be clear that Hammer doesn’t replace a dynamic environment; it’s for early-stage local development before you move into a database-integrated CMS of your choice. Go on, check it out.

A new model for the musician-to-listener relationship

A conversation with Erik Spiekermann