Doing one thing a day; or, a calendar plan that’s actually productive 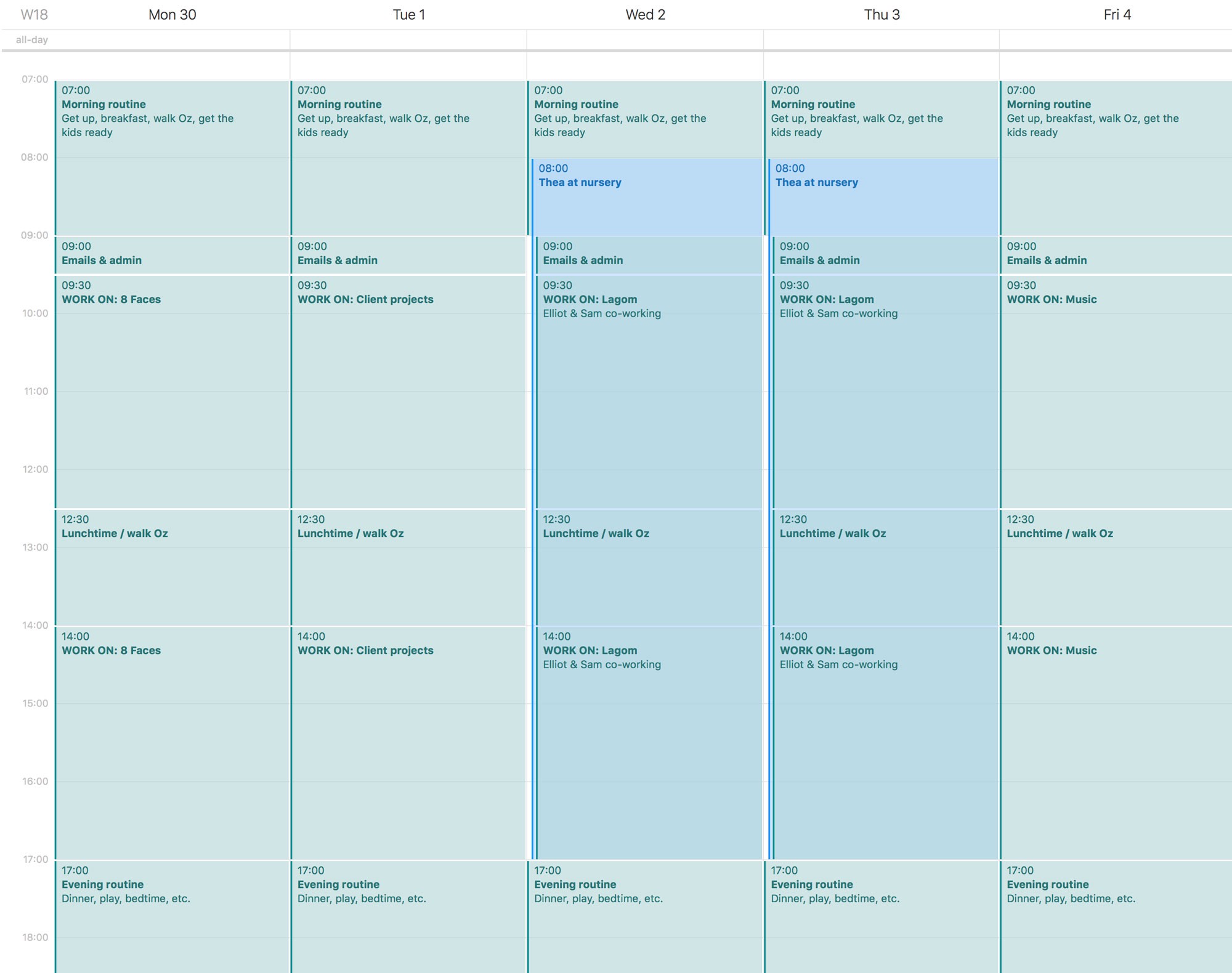 A couple of years ago, I wrote an article called ‘Working for half a day to be more productive’, and while my intentions were good, that piece suffered from a problem that has affected many of my writings on the subject of getting-things-done: I wrote the piece without having actually settled into the very routine about which I was enthusing, and — lo and behold — I no longer follow my own recommendation, having failed to stick to such a rigid schedule.

But something good came of that attempt: a new and improved method of calendar-planning that still incorporates blocks of commitments — like getting the kids ready, doing emails, walking the dog — but has evolved to become something I would loosely describe as ‘doing one thing a day’. (Everyone loves giving their TGD techniques brands, right?) The idea is that when you’re juggling multiple projects, you’ll be at your most productive if you assign specific days (or parts of days) for specific tasks and — most importantly — don’t let yourself do other days’ tasks in their non-allocated slots.

This is nothing revolutionary. It’s compartmentalising in its simplest form. But for me, personally, I really struggle with balancing multiple projects. Sure, in an ideal world, I’d not be juggling so many different aspects of work, but I’ve come to accept that it’s a reality that can’t be avoided, and compartmentalising tasks as best I can alleviates a fair degree of stress. The idea is that instead of fretting about the spiralling chaos of deadlines spread across multiple projects and areas and disciplines, you accept that each task has its turn.

Let me give you an example of how ‘doing one thing a day’ helped with a very specific project: the gargantuan task of finally getting the 8 Faces book finished. I was out of time, out of funds, and — although I was close to the end — actually getting there seemed like an impossible feat. My to-do list for the 8 Faces project in Things was huge. So I decided to dedicate every Monday for the foreseeable future to 8 Faces. I created a morning and afternoon session in my calendar, and set both to repeat weekly; and, before long, I started to feel comfortable that, on Mondays, everything else could wait — that was my 8 Faces day. And the light at the end of the tunnel started to get a little closer.

Similarly, I blocked out Wednesdays and Thursdays for work on Lagom, and blocked out Tuesdays and Fridays for client work. Suddenly, my week had a structure. And, depending on the state of different projects, I could shift those around a little; e.g. in a month where I needed to spend more time on client work than the magazine, I made a Wednesday or Thursday into a client work day; or, during a quieter spell, I blocked out Fridays as music-making days.

This was nothing short of a small revolution in my mind: my stress levels dropped and — guess what? — I actually started getting more things done. Treating music-making like ‘work’ and allocating dedicated calendar time to it even allowed me to finish and release my EP. This is actually the crux of my talk ‘Now is Always the Wrong Time’, which I’ve been giving at conferences for the last year or so.

But it’s important for me to state that, like all things, it doesn’t always work. Some weeks, or even months, huge changes to the schedule are required. Right now, for instance, I’m totally snowed under with multiple projects and a toddler and a newborn, and no amount of time-planning is going to change the fact that that is pretty damn stressful. I’m working loads of late nights, and I’m not over the moon about that. But the allocation of calendar slots to specific tasks has at least helped make everything that little bit more manageable. Even those late nights have their slots (on Mondays and Thursdays, usually, because I don’t have to drive my daughter to nursery the next morning, as you asked).

Perhaps one of the crucial elements that’s really helped me adopt this productivity technique and keep it evolving naturally is to document the changes that happen — simply by updating the slots as you go through your day or your week enables you to see where bigger changes to the repeating slots might need to happen. And it’s best to accept that a week that starts life as a neat, symmetrical diagram will probably end up all over the place by Friday. I’m constantly moving that 7am start back a wee bit — and that’s okay.

The week is much more likely to end up looking a little less tidy — but everything still has its place.

Approaches for becoming more productive are deeply personal, and are tied explicitly to an individual’s tastes, working arrangements, and non-work commitments, but ‘doing one thing a day’ has helped me get things done far more effectively than anything else I’ve tried in the past. I hope it might help others, too.

Now, it’s time I got to bed — it’s Tuesday, which has no late slot.

An open letter to Jacob Rees-Mogg