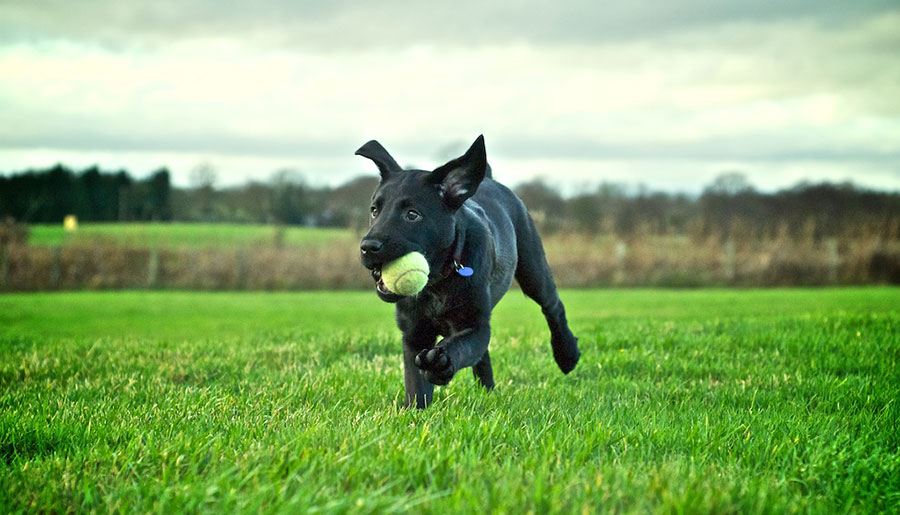 Today, I interrupt the normal flow of web-, tech-, and design-related blog posts for something a little more personal. It’s not profound, not particularly important, and of no relevance to anyone but me. But it’s something I wanted to write down for posterity. Because today was an entirely normal day and, in hindsight, it’s normal days that warrant remembering the most.

I took Ozzy out for his regular lunchtime walk, across the fields near where we live. He loves the fields because he has the chance to run around, investigate all the strange smells, and attempt to find the occasional tasty poo snack. I love the fields because you can see for miles across the rolling hills and the countryside is spectacular no matter in which direction you look; even on a dull, grey, rather nondescript day like today. It’s relaxing, and I think we both enjoy the fact that we very rarely meet another soul; not even from afar. We get to enjoy all this open space and it’s just us.

At five months old, Ozzy is generally getting better at leaving those all-too-desirable objects he’s not meant to eat, mainly thanks to us calling him away with treats. And today he was pretty good at that, and I was pleased with myself for remembering to load up my pocket with dog biscuits. But having snuck into the bushes out of my eyesight, he found the remnants of a baby bird carcass and the temptation was simply too great. I tried asking him nicely to drop it, then offered him treats, then shouted at him, and then attempted to grab it off him; all to no avail. With the bones planted firmly in his mouth, he bounded around the field, darting my every move, happy playing this most entertaining of games. Eventually I managed to grab his collar, pry the gore from his jaws, and reward him with some treats, hiding it behind my back as I did so. We walked further along and I threw it into the bushes, which was rather silly, as once we’d turned around he picked up the scent again and started searching for it once more. I only managed to distract him by running off, convincing him that we were playing another game. He chased me, drool flying from his flaps. Every time I gave him a treat my gloves absorbed yet more of the disgusting fluid. I was laughing all the time, though.

When we were nearly back at the start of the first field, he disappeared as I neared the stile. I went on, fully expecting him to reappear, and then realised that he’d been just a little too long. The pause was too great. I knew exactly what he was doing and I should’ve known he’d use my limited field of vision to his advantage. Running back into the field and over a small mound, I found him happily devouring his own poo and had to physically drag him away from it. I scolded him and told him how disappointed I was in him, but he couldn’t see my point of view. He looked up at me with eyes that said, ‘if you could make your favourite food come out of your bottom — and hot — wouldn’t you eat it?’ Well, that’s a fair point.

In between the field and pub car park where I always put his lead back on, there’s a bridge that crosses the River Chew over a small waterfall. Suddenly Ozzy decided he was going to explore the steep bank on the higher side of the waterfall and before I could stop him, he was standing in the shallow water. Rather impressed with himself, he stepped forward and suddenly dropped into deep water. Being so near the ledge of the waterfall, a gentle panic washed over me, but thankfully it also washed over Ozzy (along with a fair amount of water) and his instinct returned him to the path. It turns out he can swim.

Once on the bridge, he realised that being soaking wet was a rather exciting experience and he decided to spin wildly to mark the occasion. He came close to spinning off the side — into the waterfall proper — about three times, but luckily span close enough for me to grab his collar and re-attach the lead. It all worked out quite nicely, as his run-in with the river had washed off all the mud from the fields.

When we got home I attempted to dry him whilst wrestling the towel from his jaws and thought, I always want to remember days like this.

(Photo taken at Christmas by my fiancé Samantha)