Confessions of an independent publisher 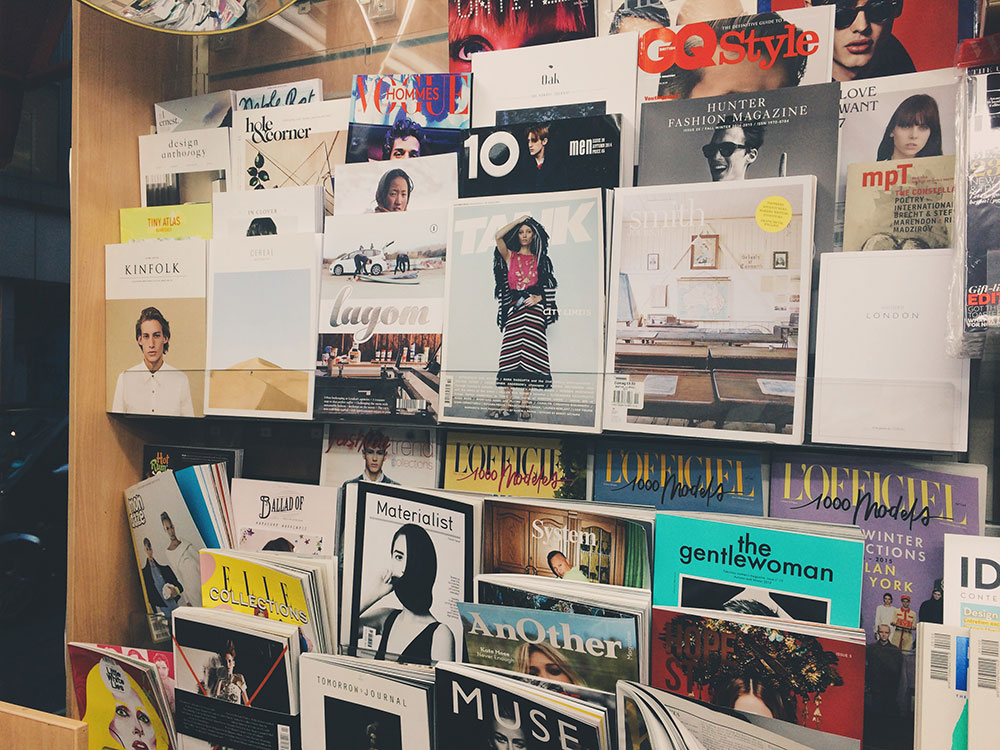 A few months ago, Jimmy Wilson got in touch and asked me a bunch of questions about publishing. They were great questions and, as many of them were ones that I get asked a lot, I said I’d publish my answers as a blog post. It’s taken me a while to get round to it (sorry, Jimmy), but — hot on the heels of Lagom’s launch — here they are:

Did you know you had an audience large enough to support the magazines right away or did you get just enough positive feedback that you decided it was worth a risk? Did this impact your decision to restrict printing the first issue of 8 Faces to 1000 issues?

Absolutely. Printing the first issue of 8 Faces seemed like a huge risk, because not only was it the first ‘real world’ product I’d made at the time, but it was also at a time before there were any other made-by-web-folk magazines like Offscreen or The Manual, so our market (which was very much the web design crowd, at least initially) was untested. I only printed 1000 copies because I honestly thought no-one would buy it — I certainly didn’t expect it to sell out within a couple of hours!

You didn’t kickstart or crowd-fund 8 Faces, Digest, or Lagom. Did you have enough pre-sales / partners to cover costs or were you out of pocket until the issues were released and selling?

We’ve never really done any pre-sales, but the aim of our partnerships has always been to cover production costs: both the physical costs of printing and the cost of paying our various contributors. I learned that as I went, though: the first issue of 8 Faces just had Media Temple as a partner and a few ads; over time the partnerships grew so that we were financially covered before the issue was printed, and then every copy sold was essentially profit.

That wasn’t the case with Digest, though, and it’s not yet the case with Lagom. Because Lagom is so new (and hence untested) and its audience much more broad, we had a harder time getting partnerships, but I think now that people can hold #1 in their hands and get what it’s about, we’ll establish a few more partnerships going forward. The goal is certainly to get to where we were with 8 Faces: partnerships cover all production costs; profit is made from sales. And I’m happy to say that Lagom has been far more successful than Digest, both in terms of physical sales and the amount we got in from partnerships. So all bodes well!

How did you approach your sponsors and advertisers? Did you have the first issues completed and some kind of proof of interest, or were they on board from the get-go? Did that change with Digest and Lagom after proving yourself with 8 Faces?

8 Faces certainly helped us prove ourselves to our main web industry partners, but Lagom is a harder sell because it’s not nearly as niche-focussed. And that’s okay. We’ve set ourselves up to build slowly, rather than peaking and then declining, which is what happened — to an extent — with 8 Faces. Oh, and there was no proof or anything back when we launched 8 Faces — we completely winged it.

Kai has a great post explaining the financials of Offscreen. It’s exposing quite a bit of yourself, but would you consider a similar post? Even if it’s not exact figures, showing percentages of income vs expenses and any experiences with unexpected costs would be really insightful.

I would, especially as Lagom’s financials are fresh in my mind. I’ll elaborate more in a separate post, but for now I’m happy to say that there are very few unexpected costs, especially now that we’ve published a number of magazines.

Essentially it comes down to this: the printing bill is pretty big; the contributors’ payments are the next big cost; other than that it’s just running costs like travel and the website and what not. As I mentioned before, with 8 Faces we got to a place where our partnerships would cover all of our costs and then we’d make our money by selling the actual magazine. Actually, the partnerships more than covered the costs: they actually paid a bit for our time, too. And that is absolutely the position we’re trying to reach with Lagom, too. That, in my mind, is how you run a sustainable magazine business.

I’ve never done a traditional interview; did you have experience interviewing people before you started 8 Faces? Do you know of any resources online or off on the right way to approach an interview?

No, not at all, and I think I wasn’t a particularly good interviewer when I started. In fact I’m not now, either. It’s one of the reasons I got more and more guest interviewers in for 8 Faces, and why I took more of a back seat interviewing folks for Lagom. It’s important to play to your strengths and get other people in who are better than you.

How did you come up with the interviewees and contributors for the first issues of your magazines? Were most of them in your existing inner circle, or did you solicit ideas and recommendations from outside? Was it easier as the magazines gained exposure and following?

The interviewees weren’t at all in my circle of friends or colleagues for 8 Faces. At the time, I was a total outsider to the world of type. With Lagom, we drew heavily on the contributors we’ve worked with over the years as well as a big bunch of folks we’ve wanted to work with for quite some time. That’s one of the biggest pleasures of running a magazine: you get to work with the people you’ve always wanted to work with!

We’ve had an overwhelming number of people approach us since Lagom’s release, either wanting to contribute, or suggesting topics for us to cover. That’s great because it allows us to expand outside of our area of knowledge, and we’ve never had a response like that to anything we’ve done before.

How did you find your paper source, printer, and shipper/distribution company? Would you recommend working with local companies so that it eases any of the issues that inevitably pop up, or is it ok to work globally due to how connected we’ve become?

The original printer of 8 Faces was based in Nottingham, but when we realised how expensive they were, we went looking for a new printer and found Taylor Brothers in Bristol by looking at who printed Cereal. Not only were they much cheaper for the same level of quality, but our relationship is so much tighter. Having them just up the road means I can go in whenever to talk about any issues, check out samples, take photos of the mags on the press — it’s brilliant, and it’s made me always want to work with local suppliers. Our fulfilment house is in Bristol, too, and works wonderfully for the same reasons.

Have you stocked your magazines in traditional stores, or were all the sales direct?

8 Faces and Digest relied almost exclusively on sales from their respective websites, and although I think this worked fine for 8 Faces, it was part of Digest’s downfall, and exactly why, when we launched Lagom, we decided to focus on getting it into shops. It’s not just about selling to people via physical stores; it’s about getting your brand into the public consciousness. I want someone to walk into a bookstore they admire, see Lagom next to other magazines they love, and then visit another shop — perhaps halfway around the world — and see it there, too. Having a physical presence on the shelf is very much about association: like, “oh, this magazine must be half decent, because it’s sitting next to Monocle and Kinfolk.” And seeing it out there in the shops has been a wonderful feeling for us.

Did you find Lagom to be easier to produce after all the experience gained from producing 8 Faces beforehand? Were there ways in which it was harder?

Yes, I learned a lot, as did the entire team. Every issue of 8 Faces was an educational experience. And I really feel like Lagom is a culmination of everything we’ve learned from publishing eight issues of 8 Faces, one issue of Digest, and Insites: The Book. The only ways in which it’s been harder is that you almost start from scratch when you launch a new title, especially one with such a broad subject matter.

I know you're working on this for 8 Faces, but do you find releasing Digest online was worth the work you guys put into building and maintaining an extra version? In this age of users avoiding paywalls I’m curious how much of your sales are attributed to the online readership.

In the case of Digest, no, it wasn’t. And in the case of 8 Faces, we’ve actually abandoned our plans to put it all online for now. It’s probably something we’ll revisit once we do the book that collects (and redesigns) all eight issues in one volume.

But for Lagom we’re actually doing something really interesting: we’re creating a website version that will live inside an app. It’s actually exactly what I proposed in ‘On digital publishing in 2014’ and I’m so excited about it. At the moment it’s very much a work in progress, but I think an HTML-based approach to iPad magazines has the power to radically shift how we think of think of them.

Lastly, do you still find being the Editor-in-Chief of such large projects enjoyable after the 4+ years since you started? One of my main concerns is that producing something of this size might tarnish my love for both print and building online products.

At the end of 8 Faces’ run, I was ready to move on, which worked out well because I’d only ever planned to do eight issues. Now I’m ready for the next thing and that’s Lagom. I’m hoping it’ll last longer than four years, though, because the subject matter is so, so, so much more varied than 8 Faces. There’s almost no formula, and that’s extremely liberating.

I think there are also lots of opportunities outside of just the printed mag itself: there's the website, the iPad app, merchandise, potential partnerships that result in products related to the brand... Generally I find working across multiple media keeps me sane, and I feel like this new magazine will offer many ways to do that.