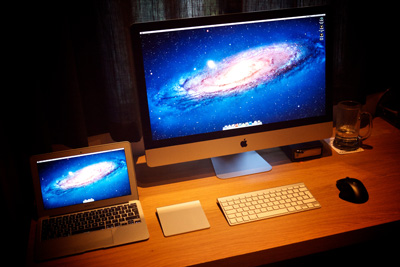 People keep asking me about my new iMac-plus-Air set-up, so I wanted to write a quick note it: so far, it’s absolutely bloody fantastic!

I’ll elaborate. As I said when I originally blogged about my plans for a cloud-centric Mac set-up, it’s all about the extremes: the biggest possible iMac and the smallest possible Air. Many people can’t understand why I went with an 11" Air, but in my opinion, a 13" defies the point of getting an Air in the first place. People forget that the 11" Air has a horizontal resolution of 1366 pixels, which is just 74 pixels narrower than my old friend, the 15" MacBook Pro. 74 pixels! So all you lose (horizontally) is this:

Of course, I must admit that I’m not relying on the Air being my only machine; it’ll be sharing the duties with the iMac, which is obviously huge. Its horizontal pixel count is 2560. Blimey.

The story so far

I’ve had both machines for five days now, and have been using them for actual work for about three days. I’m happy to report that apart from the initial pain of having to set up two machines rather than one (double the installations, double the preference changes, etc.), they’ve been performing exactly as I’d hoped. The Air is blazingly fast; even faster than my old MBP — which had an SSD in it —  and seems about as fast as the iMac in every task I’ve thrown at it. And yes, I’ve been using Photoshop on both. Working across the two machines has been absolutely fine so far, as all of the important stuff (including several libraries and preferences, not just apps) is synced via Dropbox.

I realise that this is early days yet, and I’m treating this as something of an experiment, but it’s working wonderfully so far. For anyone who travels, the Air is just perfect: it’s super light, extremely small, and the new models are pro-level machines in terms of power. And having the iMac at home with absolutely everything on it means that I can keep the Air lean, too, which is even better.

Needless to say, I’m selling my existing 15" MacBook Pro. It’s a couple of years old now, but I put a 256GB SSD in it about five months ago and it’s basically like a new machine. It has 4GB or RAM and I’m throwing in a spare battery (it’s the unibody model, but the one where you can open the bottom part where the battery lies), a neoprene sleeve, and a BookArc. £900. Sold to my studio mate, Mr. Tom Oliver Harrison!