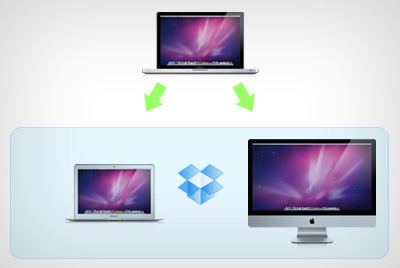 Last night on Twitter, I thought aloud about my possible plans to replace my current Mac set-up with one slightly more cloud-centric. It generated a lot of responses, so I thought I’d elaborate about it here; something I promised to do whenever tweets need clarification.

This is my current Mac set-up:

(I also have a 13" MBP, but as it’s mainly in use by the missus and is also meant to act as a dedicated machine for my music-making alter-ego, I don’t include it in my ‘work’ set-up. We have a Mac Mini, too, but that’s purely a media centre, and remains permanently connected to our TV.)

This set-up is great. It means that I have a desktop-like experience when working from home, yet I can carry my ‘office’ with me when working at the studio or on the road. It’s the best of both words.

As it stands, my trusty MBP sits comfortably between two extremes: power and portability. It’s relatively powerful and it’s relatively portable. But what if — instead of trying to find a middle ground — I sold my current gear and opted for the two extremes? In other words:

At first, this may seem a little excessive, replacing one solid, all-round computer with two computers that are each quite dedicated to particular tasks. But the key thing for me is that I see the iMac and Air combo more as just one computer: with everything stored in Dropbox, I’m effectively only changing the chassis. Except that with this set-up, there’s no hardware to move around.

Right now, my MBP contains everything: all of my working files, all of my games, and various apps for numerous tasks. But with the option of storing the superfluous stuff on the iMac and keeping the Air lean and clean — essentially just the core apps and my Dropbox folder — I think this could actually work. My photos, music library, and film / TV collection have long been sat on external drives, so there would be no change there. With the majority of apps allowing you to store their library files in a location of your choice (my FontExplorer and LittleSnapper libraries sit happily in Dropbox as it is), it’s not like there would even be much hassle in terms of set-up.

I love Dropbox. In the last year or so, it feels like it’s finally made all this talk of cloud computing a viable, useful, not-just-novel reality. And with cloud-based storage from Amazon already here — and supposedly coming soon from Apple — maybe now is the time to embrace the cloud properly, and discard the notion of hard drives being… er… hard.

This is the first of two posts I want to write about Dropbox and the cloud. Sorry, it was a little later than a week, but I’ve now written about the other consideration with this set-up: a cloud-centric software licence.

If you’re interested in adopting a cloud-based set-up for a business environment, it’s worth reading up on the red flags you should consider when looking for a cloud provider.

An open letter to Dropbox