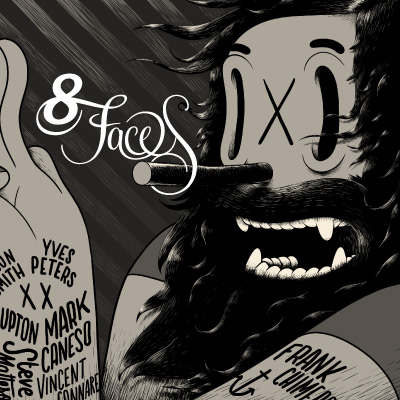 As I write this, nestled in a corner of Starbucks, we’re just a few hours away from the release of 8 Faces #3, and I’m full of nervous energy.

It’s weird. I’ve settled into something that loosely resembles a ‘routine’ in terms of producing the magazine, and the same goes with getting the site’s back-end ready (a task handled expertly by Dan Millar, who has continued to improve the shop functionality with every new release), but — happily — my nervous excitement on the eve of each release has yet to fade.

I had no idea the first issue would sell out so quickly, and when it did and the demand went crazy, I was quietly confident that issue two would do similarly well, which it did. But now that we’re onto our third issue and the magazine is one year old, what will happen? Has the novelty worn off for the die-hard fans, with the desperate rush to get a copy now a thing of the past? Or will the demand be even greater than before, now that the magazine has been exposed to a bigger audience and has established a firm reputation for selling out so quickly? I honestly don’t know, but obviously I’m hoping for the latter!

I’m not going to try and sell you the magazine here. If you want to know the details, have a look at one of our recent newsletters. All I’ll say is that I personally think this is our best issue yet, especially from an aesthetic standpoint, and I’m so excited about showing it to the world.

See you at 4pm this afternoon?