1 day with the Apple Watch 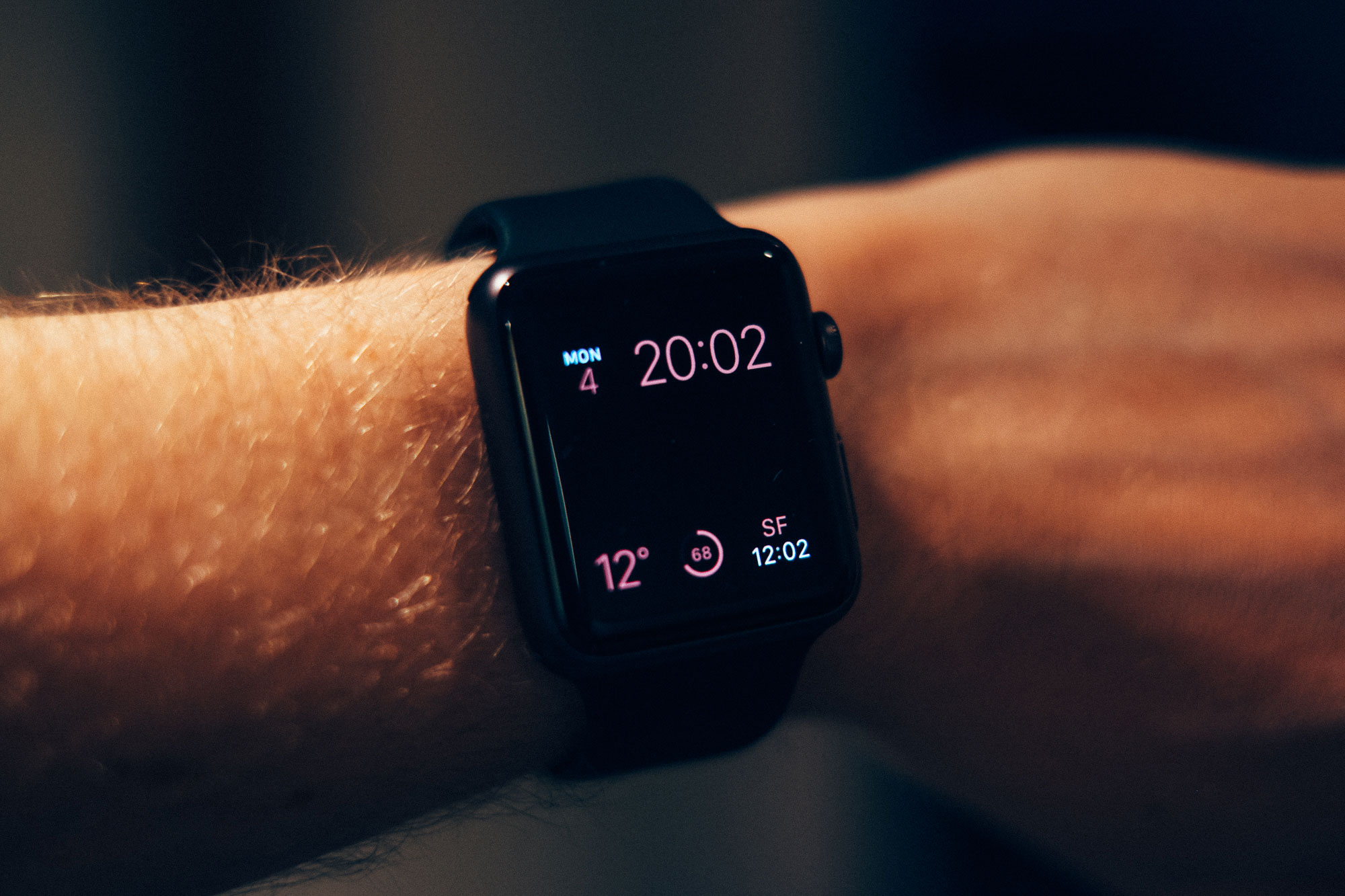 It’s hard not to be reactionary about new technology, so it’s inevitable that most things written about the Apple Watch are based on first impressions and small periods of time spent with the device. I wanted to write about the Watch without falling into this trap, so I thought I’d write two separate posts after spending one day, (sorry, didn't quite manage it), and one month with it. This first post is, of course, the reactionary one, but hopefully it’ll be followed by some more perspective at the one-week and one-month marks. I’m interested to see how my own feelings about the hardware and software develop over this time.

I opted for the 42mm Space Grey Sport model with a black strap, which I felt was a more subtle combination than most of the Sport models, with their silver case and loudly-coloured straps. It seemed unwise to spend a fair chunk of money — i.e. anything more than a Sport model — on something that would be outdated in a year or two, or where most of the money would be going on the strap rather than the device itself.

The Watch itself is a beautiful piece of kit (although weirdly it takes far more design cues from the curvy first-generation iPhone than any hardware Apple have made in recent years). The point at which the strap meets the body feels particularly elegant. If you look closely at the screen, there’s a bevel around it, but in most conditions this is almost invisible, so the screen has the effect of bleeding right to the edges of the Watch. It’s possibly one of the nicest touches.

As I imagine most people do, the first thing I did once the Watch was on my wrist was customise the clock face. A couple of hours later, I changed it again, and although one of the appeals of a smart watch is the reconfigurability of the face, I’ve already settled on a setup (pictured above) that works really nicely for me: a large time display with secondary information consisting of the date, the temperature, the battery charge, and the time in San Francisco — so useful for Typekit meetings. I’ve turned off all calendar appointments.

Lifting your arm to activate the Watch is a clever behaviour and when it works, it’s great. And it does work most of the time. But it’d be remiss of me to say that it’s perfect: sometimes multiple lifts are necessary, and it often fails when lying down (hey, I have a newborn!).

Beyond the watch face itself, the next logical step was to mess around with the layout of the app icons, which I did using the accompanying iPhone app, although you can also do so on the Watch itself. In both instances this is fiddly, due to the way the icons re-arrange themselves, and it’s frustrating not being able to remove the in-built apps, or hide them away somewhere (which I do with folders on the iPhone). Fortunately, everything feels ready to go, since all settings are mirrored from the iPhone. I was wary of getting constant notifications, but since I’m fairly frugal in notification settings on my iPhone anyway, they don’t appear too frequently on my Watch.

The first non-default app I opened was AeroPress Timer. It was a bit buggy at first, although in fairness I was quite a distance from my iPhone at the time, and I’m not sure how essential that proximity is to smooth-running apps. Ever since, it’s worked fine, and of all the apps I currently have on the Watch, this actually feels the most independent, in that it’s not merely throwing notifications for the iPhone app; it pretty much does everything the standard app can do, but on your wrist. For many apps, that would be a pointless duplication of functionality; for AeroPress Timer, it’s perfectly suited to the task at hand.

After a few hours of use, something really threw me: I’d been getting notifications for text messages, which I could then view and reply to, but then I got a notification for a Facebook Messenger message. I didn’t realise there was a Facebook Messenger Watch app,, I thought. And there isn’t: it’s merely a notification. You can read the message, but that’s it. A couple of hours later, the same thing happened with a WhatsApp message: I got the notification and I could read the full message, but not act on it (or view previous messages in the thread). On the face of it, this merely seemed a tad confusing, but by the end of the first day, it became genuinely frustrating. Text messages, Facebook Messenger messages, and WhatsApp messages are essentially the same thing, but only text messages can be acted upon via the Watch.

I think this is significant. For the first time in Apple’s ecosystem, there’s a fundamental disconnect between receiving a notification and being able to act upon it. If you’re on an iPhone, iPad, or Mac, and you see a notification, you can launch the relevant app and take an appropriate action, but that’s not that case with the Watch: unless it’s an Apple app sending you that notification, you’re forced to switch devices to act.

(Of course, this is most likely a problem that will disappear once more third party developers have their equivalent Watch apps.)

The Apple Watch is a beautiful, clever bit of kit, and using it seems magical in the same way it did to use an iPhone for the first time. I don’t mean ‘magical’ in an Apple marketing sense; I mean it feels genuinely amazing to have a computer on my wrist. On my first afternoon, I received a call while I was driving and answering it was so ridiculously easy. It was already on speakerphone and the whole thing felt far safer and superior to using my iPhone hands-free. Dictating replies to text messages is surprisingly reliable and hasn’t yet made me long for a keyboard. Overall, the Watch is seriously impressive.

But it’s also not without its flaws and quirks. The disconnect created by receiving notifications from non-Watch apps that can’t be acted upon is a source of frustration, as is the less-than-perfect motion detection when attempting to activate the display. And, at the end of the first day, the battery was almost completely exhausted. It’ll be interesting to see how much of an issue that becomes.